Government of Sri Lanka has already identified and decided to implement Central Expressway as one of the most important initiatives to develop the road network areas under a plan for the building of a new country and economic avenues to the people of the country. The Ministry of Higher Education & Highways has taken initial steps for implementation of construction of Kurunegala – Dambulla Central expressway as road network extension in five major Projects have been identified under Awakening Polonnaruwa District Programme. The Chinese companies have expressed their willingness to undertake all five projects under RajarataNovodaya – President's Programme.

Accordingly, this expressway was proposed to commence from Kadawatha on Colombo Outer Circular Highway (E002) and ends at Dambulla on Ambepussa – Kurunagala – Trincomalee Road (A006 Road); with an expressway link to Kandy which commences from Potuhera and ends at Galageda on Katugastota – Kurunagala – Puttalam Road (A010). The Central Eexpressway–IV passes through the main towns such as Kurunagala, Ridigama,Melsiripura and Galewela and Dambulla. 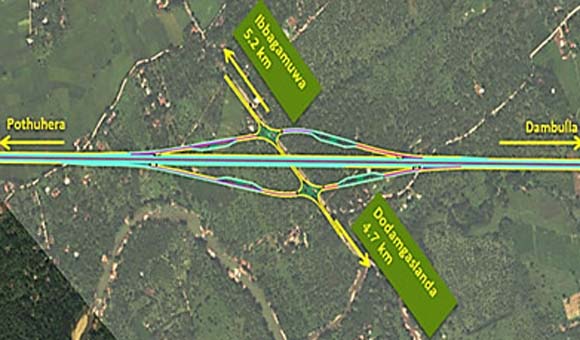